A solo, spoken from the heart

Anan ATOYAMA experienced September 11, 2001 in New York. Since then, she questions the relationship between the individual and the political system. Black Rain embodies the voices silenced that day

“Black Rain” was used to describe the nuclear fallout from the American bombs endured by the Japanese. Black, from the mix of dust, water, and debris, these harmful showers were seen as relief by victims completely dehydrated by explosions’ blasts. Their mouths welcomed what turned out to be a true poison.

This solo, spoken from the heart, is a dialogue with the forgotten from the innumerable wars of the twentieth and twenty-first centuries, that continue to plunge humanity into suffering, resentment, and pain.

The conflicts of this scale raise questions about the interwoven fates of nations and their citizens. Despite the reality of the situation, can we allow ourselves to imagine freedom from this brutality, surrounding ourselves in a “dream of love,” healing all wounds?

The theme, the context, and the create process make this solo a standout performance in the company’s repertoire.

A solo, spoken from the heart, which embodies the silenced voices of international conflicts. 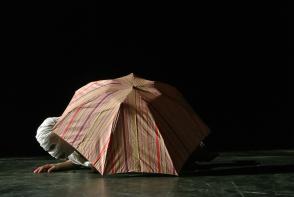 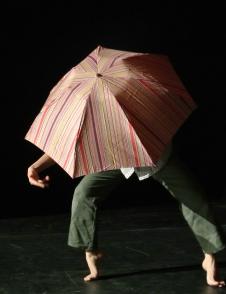 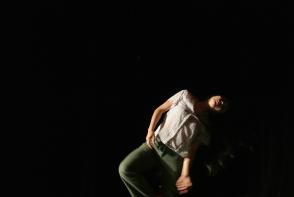 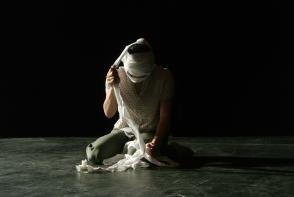 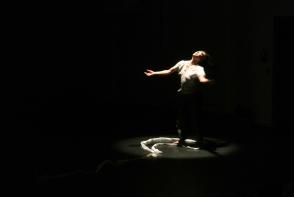 Marc Ribault: Anan, how was this solo born?

Anan: The point of departure of this solo dates to September 11, 2001. This day seemed like any other. I was taking the metro. An announcement was made over the speakers, informing us that all passengers had to get off at the next station. It was once I was in the open air on Lexington Avenue that I felt that the atmosphere was different. People were fleeing and yelling, like in Hollywood catastrophe movies. Someone yelled that there was a bomb. I wondered what he was saying, the disorder being everywhere. Then someone else yelled, “War has begun” I suddenly realized that something very serious was happening, that a major event was taking place. My body can still recall that moment.

I felt lost, like all the people around me, and a feeling of hopelessness mixed with fear entered us. Ten hours later, when some metro lines were working again, I went home. The line that I had to take was above ground. Passing over the bridge that spans the East River, I could see, in place of the Twin Towers, this huge column of smoke rise continually and calmly. I felt every kind of sensation in my body and a long maturation began. It was only seven years later, in 2008, that this maturation knocked at my door, asking me to express myself.

M.R : How did the creation of Black Rain occur?

A.A: It is the company’s first solo. Its development was an important experience for me. After my first intuition that I wanted to deal with this subject, I remember having dove into personal narratives from victims of the atomic bombs, the ones that suddenly toppled Hiroshima and Nagasaki, and impacted my Japanese ancestors. At the same time I went to the studio to allow my body to express itself: nothing came, or just small pieces. However I did not feel lost, instead I felt a need for time or space: to make room in myself to accommodate something or someone.

And indeed, the gestation period finally ended and the creative flux went off. The half-hour of dance was created in just two days. A character was born, embodying within her body and her soul all these experiences. I gave her my body and it is this character who dances in “Black Rain.”